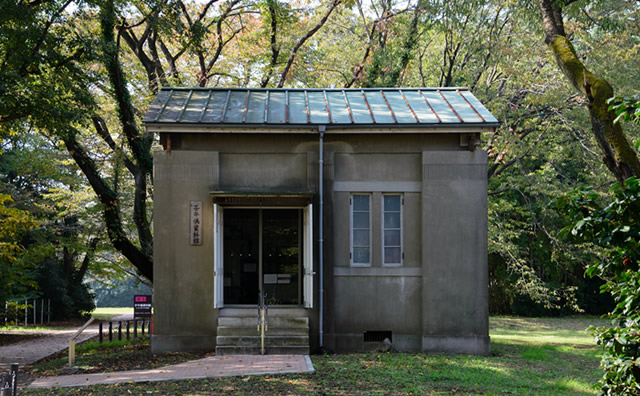 This building, completed in 1925, was where the Repsold Transit Instrument observed the heavens.

A transit instrument and a meridian circle are types of telescopes specifically designed to measure the precise positions of celestial objects transiting the meridian, the line that connects due north to due south through the zenith. Both of these telescopes can therefore only rotate along the meridian plane (from north to south).

The Repsold Transit Instrument, housed in this building, was manufactured in Germany in 1880. When Tokyo Astronomical Observatory (TAO) was located in Azabu Ward, the instrument was used for time and longitude determinations. The site where it was installed is now a reference point for astronomical longitude.

After TAO’s relocation to Mitaka Village, this instrument was installed in the current building and used to determine the right ascensions of the Moon, planets, and major asteroids. After 1937, it was used primarily for measuring the right ascensions of stars, and in 1949, the results were published in the first standardized star catalog in Japan “Tokyo Mitaka Catalogue of Zodiacal Stars.” A subsequent catalog “Tokyo Mitaka Catalogue of Equatorial Stars” was published in 1962, but the instrument retired from operations when the observations of equatorial stars concluded, and has since been preserved in the building.

The column capitals and the entrance eaves are decorated with Secession-style linear patterns, features typical of this era, adding accents to the building.

This building is now used as a museum to exhibit a collection of valuable transit instruments. 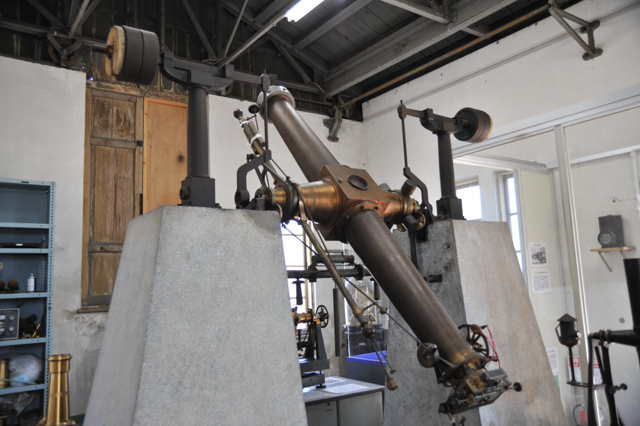 A transit instrument is a telescope used to determine the local time or longitude by precisely measuring the times when celestial objects transit the meridian. When it was installed in Azabu Ward, the Repsold Transit Instrument was used primarily for time determination. The signal cannon placed on the ruins of Edo Castle’s main tower (tenshu) was fired every day at noon based on the time determined by this historic instrument. The property in Azabu Ward where TAO was first located was cramped and situated in an urban area, so the city lights illuminating the night sky made the location unsuitable for observations.

TAO therefore planned to relocate to a more spacious property in Mitaka Village, Kitatama District, where the sky was also darker. But the Russo-Japanese War, which lasted from 1904 to 1905, imposed a heavy financial burden on the government even though Japan won the war. As a result, the government could not obtain the property for the new campus until 1909, and the financing for the relocation remained sluggish.

The relocation eventually started around 1914, but on September 1, 1923, the Great Kanto Earthquake hit the Tokyo metropolitan area, devastating the observatory building in Azabu Ward. The Repsold Transit Instrument, however, was fortunate enough to survive the catastrophe. This earthquake dramatically accelerated the relocation process, and the transit instrument was moved to the Repsold Transit Instrument Building completed in 1925.

As a foundational astronomical instrument with over 130 years of history, the Repsold Transit Instrument is forever etched in the history of Japanese astronomy.

This instrument was listed as an Important Cultural Property of Japan in June 2011.