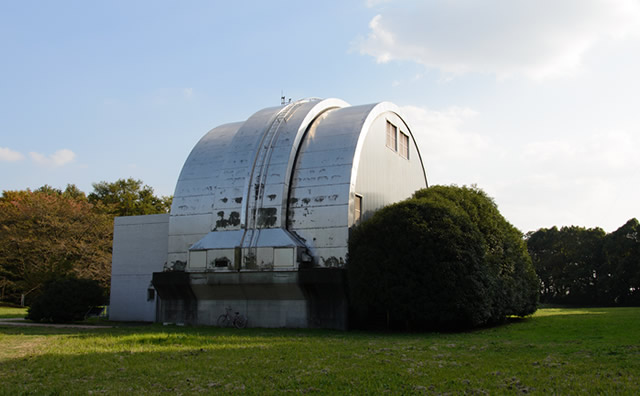 The Photoelectric Meridian Circle had been used for the astrometric observations of celestial bodies, built in 1982. The telescope is a specially-equipped telescope (meridian circle) to determine the precise positioning of celestial bodies, and had been used since 1984. In each of the low spots at the north and south of the dome, there are "the meridian marks" that serve as ground control points.

Now, the dome has been organized as the astronomical instruments museum.

The photoelectric meridian circle is five times more efficient than visual observation and is capable of determining the position of stars and galaxies up to 12 magnitude with accuracy of 0.1 arcsecond by just one observation. The sun was observed during the day, and at night, many stars could be observed at the rate of one celestial body every three minutes. The star catalogs that summarized and compiled these observation results were helpful for the variety astronomical researches such as elucidation of the movement of the galactic rotation and the solar system objects, and so on.