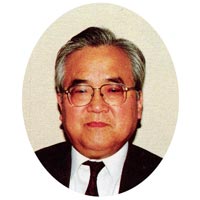 Dr. Yoshihide Kozai, Professor Emeritus of the National Astronomical Observatory of Japan (NAOJ) and the founding Director General of NAOJ until 1994, passed away due to liver failure at 6:15 p.m. on Monday, February 5, 2018, at age 89.

Dr. Yoshihide Kozai was a global leader in the field of astronomy. He contributed greatly to the development of astronomy in Japan, Asia, and the whole world. Dr. Kozai started his carrier as an astronomer at Tokyo Astronomical Observatory (TAO), University of Tokyo in 1952. He also served as a Visiting Researcher of the Smithsonian Astrophysical Observatory from 1958 to 1962. He was appointed Director of TAO in 1981, and led the operational reformation of TAO toward a modern astronomical institute, including its reorganization into an Inter-University Research Institute, NAOJ (National Astronomical Observatory of Japan) in 1988. He served as the founding Director General of NAOJ until 1994. During this time he conducted a wide variety of important activities, such as starting the 8.2 meter aperture Subaru Telescope project on Maunakea as Japan’s first large overseas research facility, and serving as the first ever Japanese President of the International Astronomical Union (IAU) from 1988 to 1991, etc.

He is known worldwide in the research field of celestial mechanics for his work on the motion of artificial satellites. He had many important achievements, such as proposing “Kozai’s equations” which are still used for satellite orbit calculations and based on them he discovered the North-South asymmetry of the Earth (the so called “Pear Shape”). He also proposed the kinematic mechanism by which asteroids in inclined or elliptical orbits experience large changes in their orbits due to the gravity of the planets. This principle is known as the “Kozai mechanism” which is now widely used for the dynamical evolution of exoplanet systems. For these achievements, he received the Imperial Prize and the Japan Academy Prize in 1979, American Astronomical Society Brouwer Award in 1990, Second Class Order of the Sacred Treasure in 2002, and Person of Cultural Merit in 2009. As a member of the Science Council of Japan he worked to improve the situation of female researchers. After retiring from NAOJ he continued making contributions to the astronomical community. As Director of Gunma Astronomical Observatory, he supported young researchers from Japan and Asian nations. We will not forget his friendly interactions with amateur astronomers, writing books for the public and serving on the editorial committee for astronomy magazines, etc.

We respectfully mourn his passing.

Dr. Yoshihide Kozai made great accomplishments in the study of celestial mechanics. On the other hand, as the last Director General of Tokyo Astronomical Observatory, he established the cornerstone for the development of the National Astronomical Observatory of Japan as an Inter-University Research Institute. Japanese astronomy has experienced a huge growth thanks to his work. He also decided to set up a large telescope outside Japan (later named the Subaru Telescope) as founding Director General of NAOJ. This was the first time for Japan to build a telescope overseas. At the same time, he led gravitational wave detector experiments cooperating with the Institute of Cosmic Ray Research, University of Tokyo. In the 1990’s, TAMA300 in Mitaka Campus proved the potential of laser interferometers as gravitational wave detectors. We respectfully mourn Dr. Kozai who made great contributions to the development of Japanese and worldwide astronomy and pray that his soul may rest in peace.