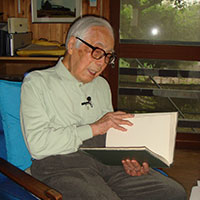 Professor Yoshio Fujita, a one-time President of the Japan Academy, passed away due to heart failure on January 9, 2013, aged 104.

Prof. Fujita was born in Fukui City, Fukui Prefecture in 1908. After graduation of Department of Astronomy, Physics Division, Tokyo Imperial University (present University of Tokyo) in 1931, he hold successively an assistant professor and an professor of Physics Division. He also worked as the board chairperson of the Japan Astronomical Society, the President of the Japan Academy, and so on. In 1996, he was selected as Persons of Cultural Merit in 1996.

We respectfully offer our condolences.